The Gate of kiss 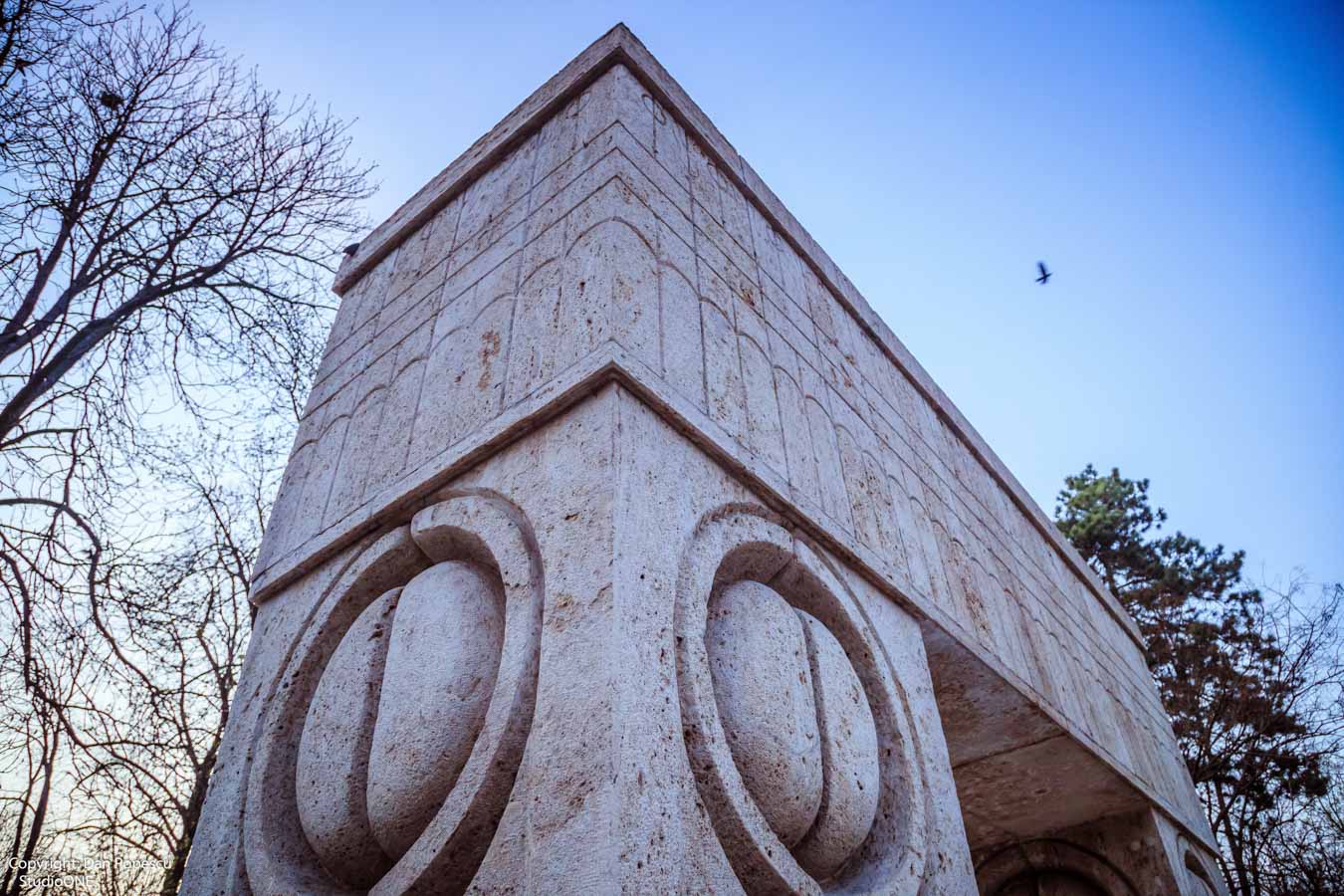 The Gate of the Kiss is a stone sculpture, made by Constantin Brâncuși, part of the triptych of the Monumental Ensemble from Târgu Jiu. The work was placed in its place in October 1937 and was carved in the first part of 1938, being finalised on September 20 and inaugurated on October 27, 1938.
The Gate of the Kiss, which is located on the alley from the entrance of The City Park, is carved out of porous stone, extracted from the quarries in the surroundings, being composed of thick, parallelepiped columns, which supports an arch with a larger dimension than the columns, having 6.45 m wide, 5.13 m high and 1.69 m thick.
On the faces of each column is the symbol of the kiss, two halves of a circle, so characteristic of Brâncuși’s work. The architrave also has this symbol inlaid, as a kind of watermark. In addition, in the watermark there are inlays that bring with a kind of roof of the gate, as if the gate would be covered with shingles. The arch of the gate has a delicate linear ornament: it is a continuity of small arches, and above, on three horizontal lines, we find the continuation of identical oval shapes, as if they were the outline of the face and shoulders.
The kissing gate looks like a triumphal arch, symbolizing the triumph of life over the dead.
As with The Endless Column, the idea of The Gate was much older than the moment of transposing into stone of the monument.
In 1907, Brâncuși had made a first version of The Kiss, which, simplified, became in 1910 a funeral monument in the Montparnasse cemetery. In 1916, the sculptor completed a Column of the kiss, made up of the assembly of 4 blocks on which the figures and bodies, almost merged, can hardly be distinguished, as if they were prefabricated in two neighboring tin, standing on the four sides of this architectural fragment. The catalog of Brâncuși’s personal exhibition opened in 1933-34 at the Brummer Gallery in New York also mentions the presence of a “Column of the kiss” as part of the planned Temple of Contemplation, which the sculptor was to raise in Indore.
Referring to these columns, Brâncuși confessed to the sculptor Malvina Hoffman: “At first I dug into the stone the group of the two chained creatures …, after a long time, I thought about the face of a gate through which one could pass beyond. . Now I intend to develop the silhouettes on the motif above the gate. “
The motif of the kiss presented on the side pillars in the stylized form of huge pupils is found along the lintel of The Gate. Brancusi said “What’s up small, down is increased”.