Constantin Brancusi and the monumental ensemble “The Way of the Heroes” 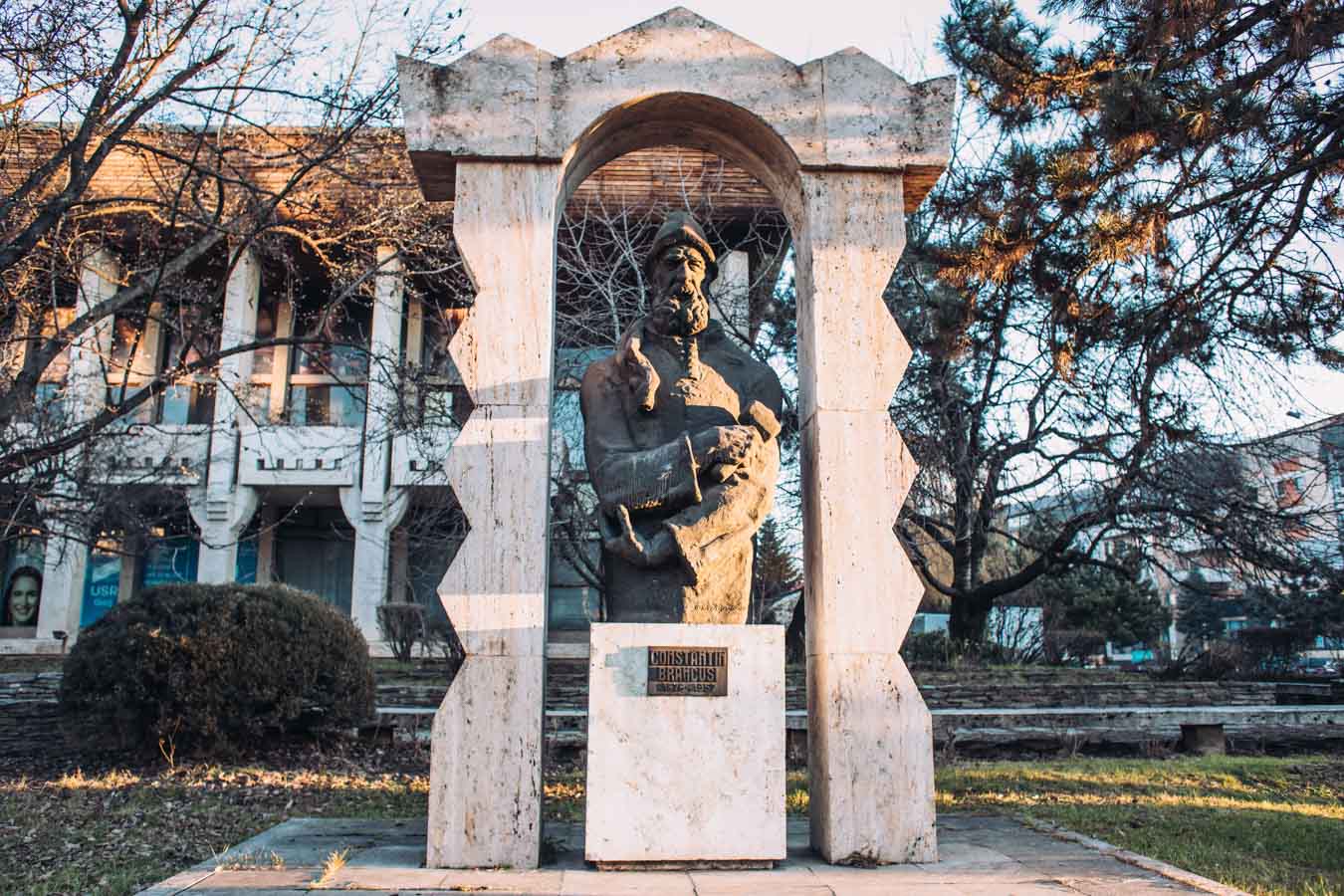 Constantin Brâncuși (b. February 19, 1876, Hobita, Peștișani, Gorj, Romania – d. March 16, 1957, Paris, France ) was the Romanian sculptor with overwhelming contributions to the renewal of language and plastic vision in contemporary sculpture. Constantin Brâncuși was elected posthumous member of the Romanian Academy. The French and the Americans designate it, most often, only by the surname, which they write without diacritical marks, Brancusi, pronouncing it according to the rules of pronunciation of the French language.

Born on February 19, 1876, in Hobita, Gorj, Constantin was the sixth child of Radu Nicolae Brâncuși (1833-1885) and Maria Brâncuși (1851-1919). He did the first primary class in Peștișani, then continued the school in Brădiceni. His childhood was marked by frequent departures from home and long years of apprenticeship in dye house workshops, shops and pubs.

In Craiova, while working as an apprentice, he made known his skill in manual work by building a violin from the materials found in the shop. Finding that it would be appropriate to develop these skills, he enrolled with a scholarship to the School of Arts and Crafts in Craiova.

After attending the School of Arts and Crafts in Craiova (1894 – 1898) he came to Bucharest where he graduated from the School of Fine Arts in 1902. During his studies, in his first year, in 1898, his work Bust of Vitellius obtained “honorable mention”. Laocoon’s head from 1900 won the bronze medal, and Studiu from 1901 won the silver medal. For two years, between 1900 and 1902, with the help of Dr. Dimitrie Gerota, he made Ecorșeu, a study for the representation of the human body, a work to which a bronze medal is awarded. The precision of the details of this work makes Ecorșeul to be used in Romanian medical schools, after several copies were made; Marcel Duchamp included the photograph of Ecorșeu in the exhibition organized at the end of 1933 at the Brummer Gallery in New York City.

Carol Davila – sculpture by Constantin Brâncuși from 1903, exhibited since 1912 in the courtyard of the Central Military Hospital in Bucharest.

In 1903 he received the first order of a public monument, the bust of the general doctor Carol Davila, which was installed at the Military Hospital in Bucharest and represents the only public monument of Brâncuși in Bucharest. This bust was commissioned by a council formed by his former teacher Dimitrie Gerota, to help Brâncuși pay for the trip to Paris. The payment for the monument was divided into two installments, the first half being paid before the work started, and the second installment after Brâncuși finished the bust. When he finished the work, it was presented to the council, but the reception was unsatisfactory, with various councilors having opposing views on the general’s physical characteristics — for example, asking for a nose reduction — but also on the positioning of the epaulets. Enraged by the council’s inability to understand the sculpture, Brâncuși leaves the meeting room to everyone’s surprise, without receiving the second half of the money needed to leave for France, deciding to walk to Paris on foot.

Brâncuși later commented on this incident as follows:

It would have been an easy job, but as a prostitute, which would have brought me the little money I needed to pay for a rail ticket to Paris. But something that had been born in me and that I felt was growing, year after year and several times in a row, burst in and I couldn’t stand it anymore. I turned left, without any military salute to the great panic and fear of Dr. Gerota, present … and I went, mentioning their mother

On the way to Paris he first passed through Hobita, where he said goodbye to his mother. He continued on his way, stopping in Vienna for a while, during which time he worked in a workshop as a furniture decorator. In Vienna he began to visit museums with works of art inaccessible in Romania. Here he became acquainted with the Egyptian sculptures that influenced his work later in life.

From Vienna he left for Munich in 1904, but after six months he set off on foot through Bavaria and Switzerland and to Langres, France. Near Lunéville, after a torrential rain in which he is caught, Brâncuși acquires an infectious pneumonia and, in critical condition, he is received at a nuns’ hospital. After a period of recovery, he thinks that he no longer has the strength or the time to walk the road to Paris, so he travels the last part of the road by train.

In 1905 he succeeded in the entrance examination to the prestigious École Nationale Supérieure des Beaux-Arts, where he worked in Antonin Mercié’s studio until 1906, when, reaching the age limit, he left school. He refuses to work as a practitioner in Auguste Rodin’s workshop, uttering the words that have become famous: “Rien ne pousse à l’ombre des grands arbres” (In the shade of the big trees nothing grows)

The sculptural ensemble Constantin Brâncuși from Târgu Jiu, also known as the monumental ensemble “Calea Eroilor” from Târgu Jiu, is a tribute to the heroes who fell during the First World War, designed and built by Constantin Brâncuși. The four sculptural components – The Table of Silence, The Alley of Chairs, The Gate of the Kiss and The Endless Column – are arranged on the same axis, oriented from west to east, with a length of 1275 m. The information panel on the monumental ensemble “Calea Eroilor” is installed in the park in Târgu Jiu, near The Infinity Column. The construction of the monument “Calea Eroilor” is largely due to the wife of Prime Minister Gheorghe Tătărescu, Arethia Tătărescu.

The Table of Silence, made of limestone, represents the dinner before the confrontation in which the combatants will participate. Time is arranged in the hourglasses-chairs that measure it. Everything goes smoothly.

The Alley of Chairs, composed of two benches and 30 stone chairs, square (hourglass-shaped) arranged on either side of the alley in groups of three, connects the group of the Table of Silence and The Gate of the Kiss, located to the east, at the entrance to the park. This was done between 1937-1938.

The Gate of the Kiss, built of travertine, is the gate through which the transition to another life is made. The reason for the kiss, present on the pillars of the gate, could also be interpreted as the eyes looking inwards.

The Endless Column, or “infinite sacrifice”, considered by Sydney Geist the pinnacle of modern art, is a true “spiritual testament” of the artist, a true axis mundi, meant to support the vault of heaven forever. 29.33 m high, it consists of 16 rhomboidal cast iron modules (according to specialists, there are 15 whole and another one located half down, half up).

Apart from the sculptures of Brâncuși, the church of the Holy Apostles Peter and Paul, inaugurated on November 7, 1937, on the same date as the Kiss Gate , is part of Calea Eroilor. The church is located on the axis of the Heroes’ Way, making a connection between the elements of the sculptural ensemble. It was built between 1927 and 1938 on the site of another church dating from 1777. The architects were Ion Antonescu, Anghel Păunescu and Iulius Doppellreiter, and the neo-Byzantine style painting was executed in fresco by the painter Iosif Keber . It is registered in the List of historical monuments in Gorj County.

In the so-called era of socialist realism, Brâncuși was banned as one of the representatives of cosmopolitan bourgeois formalism. It was only in 1964 that he was “rediscovered” in Romania as a national genius and, consequently, the ensemble from Târgu-Jiu could be arranged and cared for, after it had been abandoned for a quarter of a century.